skip to main | skip to sidebar

Well dear followers and readers of the ears, it has been a bit of a special day today!

The more numberly orientated of you will have noticed that today's date is 09/09/09, and a few weeks ago @DrGeoduck tweeted something along the lines of "Who's going to listen to nine ninth symphonies on 09/09/09?" So I thought I would. I believe several other tweeps were doing so too, including @Danksound, @MahlerFan2 and possibly @Wheresrunnicles.

Most of this post will therefore be about the ninth symphonies!

However, in the car I've heard snippets of:
Handel - Acis & Galatea.

And that was the order in which I listened to them. An order selected partly on familiarity - interspersing works with which I was very familiar (Schubert the most familiar of all - my little brother even used to rock his high chair to it when we were very small, and Malcolm Arnold the least familiar - my first ever hearing), and partly on trying to get contrasting works next to each other - the briefer works being generally juxtaposed against the weightier ones. I started with Beethoven because I knew I'd be missing my morningly Triple Concerto, and ended with Dvorak because I love it!

On the grounds that they were all "Symphony No.9", and because people may be interested, I decided to say which recordings they were. In general, I'm afraid, I choose my recordings often on the basis of price, because I simply can't afford to get all the expensive ones. Nor, generally do I own multiple recordings of very many pieces - if I'm to own a second recording of one piece, it often means there is something else I can't have at all, so multiple recordings come at the expense of more repertoire, and I generally go for more repertoire. In these days of Spotify and so on I do get chance to hear more recordings, so that's an improvement, but being a recording afficionado will have to wait until I have a little more spending money!!

In addition, I left the CDs on after some of the symphonies and heard:
Vaughan Williams - Fantasia on Greensleeves (played an arrangement for grade 5 viola!)
Mozart - Symphony No.10
Shostakovich - Symphony No.10

It was quite some experience listening to that much symphonic music, and quite so much "heavy romantic" music. So the ears then had a little rest!

To finish the day I moved onto something a little different:
Louis Armstrong - What a Wonderful World (recommended by @iamamro)
About 6 further tracks from the Album Louis Armstrong & Friends (on Spotify)

Early evening:
Amy Winehouse - Back to Black (with the extra bonus disc)

Really a very interesting way to have selected a day's listening. I'm wondering about possibilities for the future. Maybe listening to all the Op.1s I can get my hands on on New Year's day or some such. I'll keep you posted if I come up with anything jolly!

In the meantime, I thought today's little adventure merited a photograph: 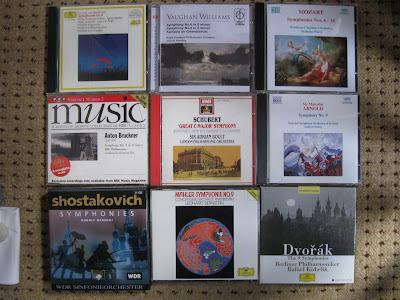